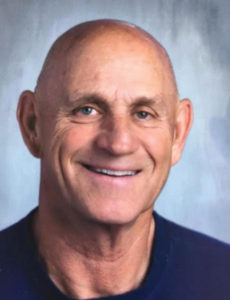 A graduate of Bonneville High School and Brigham Young University, Brad Hawkins became legendary in the Layton High School community as a 36-year teacher, coach and athletic administrator.  Brad was a three-sport athlete at Bonneville and played football and baseball at Weber State. After the school dropped baseball, Brad transferred to BYU and played his senior year for coach Glen Tuckett.

As Brad once told the Deseret News, “What a great experience for me. I mean, that man, he changed a lot of things in me. Probably the one year I spent with Glen Tuckett was as big a life-changing thing for me ever. I never met a guy that was just so passionate about the game and passionate about the kids.”

Brad played three years in the Boston Red Sox organization and scouted for the Red Sox and St, Louis Cardinals. He began his teaching career at Bountiful High School and moved after two years to Layton, where he was the head baseball coach for 16 years and assisted with the football and basketball teams. He also spent three seasons helping his longtime friend, Steve Gardner, coach baseball at Utah Valley State College, then a junior college program.

As he reflected on his coaching and administrative tenure, Brad said, “The best thing is the relationships you have with the kids and the coaches and the good times that you have together. It’s just like coach Tuckett said many times to us: ‘Guys, I don’t have a job. I go to school every day and play with the kids.’ And that’s really how it is.”

He did acknowledge there were times when coaching those teenagers made him want to pull out his hair. In any case, he’s proud to have spent 36 years at LHS. “You think of that right now and that’s crazy, because people don’t do that anymore,” he said.

Brad spent 29 years as a Layton athletic administrator, developing close relationships with longtime coaches including Robert Ferneau and Jim Batchelor, who also played for him at LHS. He was involved in many facilities projects and committees for Layton and Davis School District, including the committee for ninth-grade participation in high school athletics. He has received numerous awards of appreciation, plus a Distinguished Service Award from the Utah High School Activities Association.

He’s a professional fly fishing guide and an avid participant in triathlons and other recreational activities. Brad and his wife, Laurie, are parents of three children and live in Ogden. 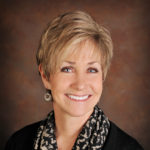 A graduate of Skyline High School and the University of Utah, Becky Anderson excelled as a three-sport coach at Murray High School and  became a mainstay of the Utah High School Activities Association as the first female assistant director.  Becky grew up with six brothers and loved sports, leading her to play softball for Utah and make a career of coaching. In turn, she chose to give back by becoming an activities administrator. As she said upon being hired in 2008, “Sports have dramatically changed since my competitive days as a female athlete; the shorts have gotten longer, the basketball  has gotten smaller, the softball glows in the dark and the net is an effective weapon in volleyball. However, one constant is the indispensable role the Utah High School Activities Association plays in governing inter-school activities to the benefit of thousands of Utah student athletes. I am thrilled at the opportunity to assist in that mission.”

As a coach, Becky will be remembered for Murray’s state softball championship in 1990, the first season when the sport was sanctioned by the UHSAA, earning an inaugural “Coach of the Year” award. She coached volleyball, basketball and softball at Murray, while working as a counselor.

Becky joined the UHSAA in 2008 and made a considerable impact for six years. When she retired in 2014, UHSAA Executive Director Rob Cuff said, “On many occasions, she has taken difficult assignments and made them  successful with her enthusiasm and electric energy. Becky’s passion for high school activities will be missed not only by our staff, but across the state.” He also admired Becky’s ability to “keep calm in stressful situations and always directed recognition to students.”

Becky was instrumental in elevating girls high school sports in Utah, particularly in volleyball, softball and drill team. She also was at the forefront in the “Raise the Bar” program and established the annual “Dare2Lead Student Leadership Conference.” Working with Bart Thompson, Becky helped establish the Unified Sports programs in soccer and track and field, a cooperative effort between the UHSAA and Special Olympics Utah.

Becky has received many awards along the way, notably earning one of the 2018 National Federation of State High School Associations (NFSHS) Citations, considered among the most highly regarded achievements in high school athletics and the performing arts. In retirement, Becky is a valued member of the USHOFF’s Board of Directors and lives in Salt Lake City. 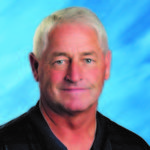 A native of Idaho and a graduate of Weber State University, Dave Hoch became a successful baseball coach at three northern Utah high  schools and administered a strong program as Northridge’s longtime athletic director. Dave also is known for his community service, having directed the Japanese American Citizen League Basket-ball Tournament for 20 years, worked as volunteer softball coach in the Weber School District and coached competitive youth teams for 10 years.  During his tenure as Northridge’s athletic director, the Knights won six state championships and 38 region titles in various sports.

Dave’s hallmark is a personality that drives him to serve selflessly, not seeking fanfare or awards. One colleague wrote, “His dedication to his students, athletes and school community are second to none. He exemplifies what the Utah Sports Hall of Fame Foundation stands for: service to others.”

Dave became one of Northridge’s original faculty members when the school opened in Layton in 1992. He was the baseball coach for nine years, while also assisting in football, and added the athletic director’s duties in 1997.  While he is being honored for his service and not necessarily his athletic achievements, Dave deserves credit for being an outstanding baseball player in his own right. As a youngster, he once broke a Babe Ruth World Series record for chances and assists in an inning and a game. He was an all-conference selection for both Gonzaga and Weber State and was signed by the Seattle Mariners, playing for Salem in the Northwest League in 1978. Dave later became a mainstay of the Smithfield Blue Sox, a semi-pro team that was a major part of the summer culture of Cache Valley in the early 1980s.

As the baseball coach of Bonneville, Clearfield and Northridge, he was known for fielding fundamentally sound teams that “did more with less,” according to one observer. He then focused on coaching his daughters’ teams in softball and produced several college athletes, including two of his daughters. Tracee played at SLCC and BYU and is now coaching at Snow Canyon High. Haylee played at Utah and SUU and later became Roy High School’s softball coach. In a Standard-Examiner story about Northridge’s softball coach, Dave displayed his insight into the coaching profession. Jasey Fatongia, he said, “has been around softball players her whole life and she knows what it takes to be a good player both mentally and physically, and a lot of times, emotionally. She can understand how all the girls are feeling … [and] say the right thing to the right people at the right time.” Dave and his wife, Janice, are parents of three children and live in Roy.

* Denotes Having Coached a National Championship

Congrats to the 2021 Hall of Fame Inductees: