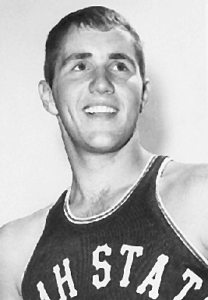 Wayne Estes’ basketball exploits are legendary, and his untimely death as a Utah State University senior more than 50 years ago still resonates in Cache Valley and beyond. Students liked him, children idolized him, teammates enjoyed being around him and he was approachable to everyone, in an era when college athletes lacked a sense of entitlement. That was especially true of a lightly recruited athlete from Anaconda, Montana. “Not pretentious at all,” said USU teammate Del Lyons, labeling Estes a magnet to little kids.” Estes arrived in Logan in the summer of 1961. In his sophomore and junior years (freshmen were ineligible for varsity competition), the 6-foot-6 forward powered the Aggies to NCAA Tournament success by averaging 20.0 and 28.3 points, respectively. USU’s talent level dropped off in his senior season as the team relied more on Estes, who averaged 33.7 points. In a December tournament in Hawaii, Estes poured in a school-record 52 points in a loss to Boston College, coached by Bob Cousy, who marveled about him.

On Feb. 7, 1965, with about five minutes remaining in a game vs. Denver in George Nelson Fieldhouse, Estes took a pass from Hal Hale in the right corner, dribbled once and delivered a 20-foot shot that gave him a Fieldhouse record of 48 points for the game and 2,001 for his career. As the visiting Pioneers brought the ball downcourt, officials stopped the game and Estes’ achievement was recognized. He died a couple of hours later, having brushed a power line while he and his friends inspected an accident scene near the campus.

Fans, coaches and teammates,including Phil Johnson, who became a longtime NBA coach, will always wonder how Estes would have performed in pro basketball. “I’ve never seen as good a shooter as Wayne Estes,” coach Ladell Andersen said in a documentary produced by Jim Godfrey as a USU master’s thesis.

The film clip of the last shot is part of the presentation in the lobby of Wayne Estes Center, USU’s 32,000-square-foot facility for basketball practice and volleyball competition that donor Jim Laub suggested be named in Estes’ honor. Andersen and many of Estes’ teammates gathered in March during an alumni reunion, observing the 50-year anniversary of his senior season. They celebrated a man who had a strong influence on others in his 21 years. “In a director’s cut of his documentary, Godfrey said, “I hope (viewers) can sense how dramatic of an effect that one person can have on a lot of people’s lives.”