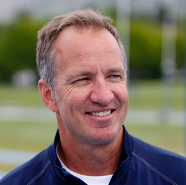 A graduate of Bonneville High School, Ed Eyestone became a four-time NCAA champion in track and field and cross country for Brigham Young University. The two-time Olympian won 10,000- meter titles in the 1984 and ’85 NCAA track meets, triumphed in the 5,000 meters in the ’85 championships and took the cross country victory in ’84. He’s one of only three runners to have won 5K, 10K and cross country championships at the NCAA level.
Ed completed his BYU career as a 10-time All-American, an Academic All-American and an NCAA “Top Six Award” winner for all-around achievements, in addition to receiving an NCAA post-graduate scholarship. He also became the first athlete in a sport other than football to win the Western Athletic Conference’s Stan Bates Award. Ed was inducted into the BYU Hall of Fame in 1998, and was recognized for his will and determination. He once crawled toward the finish line, committed to finishing a 5K in Eugene, Ore.
After college, Ed ran professionally for 15 years, including his two Olympic appearances in the marathon in Seoul in 1988 and Barcelona in 1992. In 1986, he won the famed Bay to Breakers race in San Francisco, and remains the only American to have done so in more than 30 years. He is a five-time U.S. road racer of the year.
“Ed Eyestone is kind of a legend in running, because he was so good for so long,” his former agent, Bob Wood, told the Deseret News. After working as a Weber State assistant coach under Chick Hislop, he returned to BYU in 2000 as the men’s cross country coach and a distance coach in track and field. In 2013, BYU combined its men’s and women’s track and field programs and Ed was named head coach. In cross country, he has coached BYU to 10 conference titles and has been named conference coach of the year six times. The Cougars have posted five top-10 finishes in the national meet over the past 11 years. On the track, he coached the BYU distance medley team that won the 2011 NCAA indoor title. He has coached more than 30 All-Americans in track and three of his runners have won national individual championships.
A noted expert in distance running, Ed has worked as a Runner’s World columnist and an analyst for multiple networks, including NBC’s coverage of the 2008 Olympics. Ed and his wife, Lynn, are parents of six children and live in Orem.