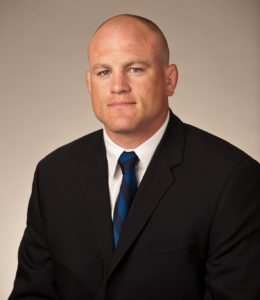 A product of Wasatch High School in Heber City, Cael Sanderson became a legendary collegiate wrestler, Olympic champion and highly successful coach. Cael will forever be remembered for compiling a 159-0 record in four years as an Iowa State wrestler. Sports Illustrated named that performance the No. 2 most outstanding achievement in college sports history. His final win in the 2002 NCAA Championships was listed among the NCAA’s “25 Defining Moments” in the organization’s centennial celebration. In posting records of 39-0, 40-0, 40-0 and 40-0, Cael became the first freshman to win the Most Outstanding Wrestler award and backed it up with three more such awards in the national meet. He also earned three Dan Hodge Trophies as the nation’s best collegiate wrestler.

Cael is one of four Sanderson brothers who wrestled for Iowa State, after he posted a 127-3 record in four years of wrestling for his father, Steve, at Wasatch High and winning four state titles.
After college, he moved into international competition and won a 2004 Olympic gold medal in Athens, Greece. He defeated Eui Jae Moon of South Korea, 3-1, in the 185-pound freestyle final. At the time, he was only the fourth Utah native ever to win a gold medal in the Summer or Winter Olympics, and the first to do so in 68 years. After working an assistant coach, he took over Iowa State’s program in 2006 and led the Cyclones to a second-place finish in the NCAA Championships, earning national “Coach of the Year” honors. His next two ISU teams also finished in the top five.
Moving to Penn State in 2009, Cael immediately revived an undistinguished program and became the first person named “Coach of the Year” in both the Big 12 and the Big Ten. The Nittany Lions finished ninth in the 2010 NCAA meet, then launched a phenomenal run of four consecutive national championships.

Penn State placed sixth in 2015, while Matt Brown of Cyprus High School became Cael’s 11th individual national champion between the two programs. In nine years as a head coach, Cael’s record in dual meets is 126-24-2. His brother Cody is Penn State’s associate head coach, having made a strong contribution to Cael’s success at both schools. Cael and his wife, Kelly, are parents of two children and live in State College, Pa.